A note from Evelyn Capel

Temple Lodge – its history and facilities

He or she who walks down Queen Caroline Street, underneath the Flyover, down to the pathway under Hammersmith Bridge will pass Temple Lodge. There is a brick wall round the premises, which includes a courtyard with a house beyond.

The entrance to the courtyard is an ironwork gate of very recent design and workmanship. A picture of it has already been included in the magazine “The British Blacksmith”. The design includes two angels blowing trumpets, produced by the designer for the British Council for Rural Industries. Inside the gate is the old house of Temple Lodge, one of the two remaining ancient buildings in Hammersmith, and built on to it is the studio, erected by Sir Frank Brangwyn for his own work. The premises have a history of their own which stretches into modern times.

The record of the house, which can be seen in the Public Library, are rather sparse, but the history of the neighbourhood can lead the imagination to encounter more than is recorded there. Hammersmith had once a harbour, which must have been a lively one, but was filled in to make a park after the First World War. During the centuries the River Thames was the highway of London. Hammersmith was on the main route from east to west.

Enquiries into the origin of the name have not produced many results, but it is quite possible that the Knights Templars, who once had their headquarters where the Inner and Middle Temples are to be found on the Strand, needed accommodation for their horses. They had many country estates far beyond London, to which many place names still testify, and Hammersmith at that time must have been a rural area, accessible to the City by boat.

Much later, when the Stuart Kings returned to the throne at the Restoration, there was a fashion for houses and palaces on the banks of the Thames, following on the trend set in the time of Henry VIII, which has left behind it the Palace of Hampton Court. Charles II’ Queen, Catherine of Braganza, a Portuguese Princess, was known to have been provided with a palace of her own near the River in Hammersmith. Because she was born a Catholic, she was allowed, something unknown in Britain at that time, a convent of nuns to be her companions.

The house at Temple Lodge is built on the foundation of an older one, usually thought to  be from the seventeenth century. It has a different ground plan from the present one. In all probability, it is part of the property occupied by Queen Catherine and her nuns.

At a later time, the estranged wife of George IV, Queen Caroline, had a palace of her own built at the end of the street on which Temple Lodge stands, which was absorbed into the premises of a central heating firm. This area is now due for rebuilding. There is no doubt that for a number of years, the Borough Councils of Hammersmith were not anxious to preserve their ancient buildings, but this policy has now been revised. Temple Lodge was rescued because it became the home of Sir Frank Brangwyn, the painter of the generations of William Morris, who was very famous in his own time. After his death, his reputation faded away, but is now being restored. In later life, Sir Frank had a country house at Ditchling in Sussex, but he retained Temple Lodge until, in 1936, it was sold and came into the hands of a builder called Charles Curtis. He had a brother Andrew, who was the founder of the first Anthoposophical  publishing company in Steiner House, and ran the bookshop there with his wife, Violet, for many years, It was through this connection that, after two year of struggle with an obstinate old builder, Temple Lodge came into the hands of the Christian Community London West.

It had been very badly used by the builder and , at one time, Brangwyn had handed over one wing of the house to the use of the Chaplain of the nuns who lived next door. It took years to straighten out the property, to make a garden among the builder’s rubbish, and to pay off the private loans with which the property had been acquired. In fairness to those who made the difficulties which we inherited, it has to be said that some excellent pieces of carving, a bust of Shakespeare and two remarkable plants remained. Since that time, the nuns have left St Vincent’s next door, and the house has become a Centre for Old People run by the Council. The garden has remained and runs parallel to that of Temple Lodge, making an open space not to be expected in such an area. It has also been used by the Christian Community for a number of beehives. Not only do bees in that area have access to many gardens along the Embankment, but they also serve, unexpectedly, as a powerful deterrent to mischief-makers who might climb the garden wall!

Under the care of the Christian Community, the house has been restored and arranged to provide accommodation for guests from far and wide, wishing to visit London and to share in the activities at Temple Lodge. The Christian Community is associated with the work proceeding from the inspirational, many visitors from far away arrive during course of a year. The large studio now serves several purposes. The central part on the ground floor is the Church of the Christian Community. The portion upstairs, which was probably arranged by the builder after Brangwyn’s time, has become a Vegetarian Restaurant, serving wholefood both to the public and to those visiting the Christian Community. Downstairs, there is a Book Centre supplying literature. Both that and the Restaurant have Art Exhibitions. Conferences are frequently held on a variety of subjects, for which the facilities prove to be excellent. Enquiries about the work of the Christian Community can be answered and other information supplied. Certain household remedies, based on plants, are available. A counselling Service based on Christian psychology, introduced by Rudolf Steiner, is offered; and some publishing is undertaken.

The facilities at Temple Lodge are available for artistic activities, such as music, painting and drama. The programme of the Christian Community contains invitations to the seven Sacraments, celebrated in the Church, studies on Christianity and the celebration of Festivals. Children are included and families are welcome.

The work of the Christian Community is supported by voluntary donations, including covenants, and is a charitable trust. Moderate charges are made for accommodations and guests staying in the house are asked to book in advance.

Temple Lodge is an old building giving varied service in modern times. It has the advantage of a courtyard in the front and a garden at the back. These are shared with visitors. You are welcome to share in what it has to offer.

Club Membership is £2 per person and lasts for a year

Our special small single room is located on the west side of the building and named after August Macke, a remarkably accomplished and influential painter despite his short life. The room is small and comfortable and overlooking the courtyard. The room has shared bathroom that are located just around the corridor.

Accessibility: Because of the historical nature of the building it is not possible to install lifts and so the bedrooms, which are all on the first and second floors are not accessible with a wheelchair.

Please note: We have a policy of not accommodation children under age of 12. This policy is only in place as the rooms in our historically listed building are acoustically sensitive to loud noise. 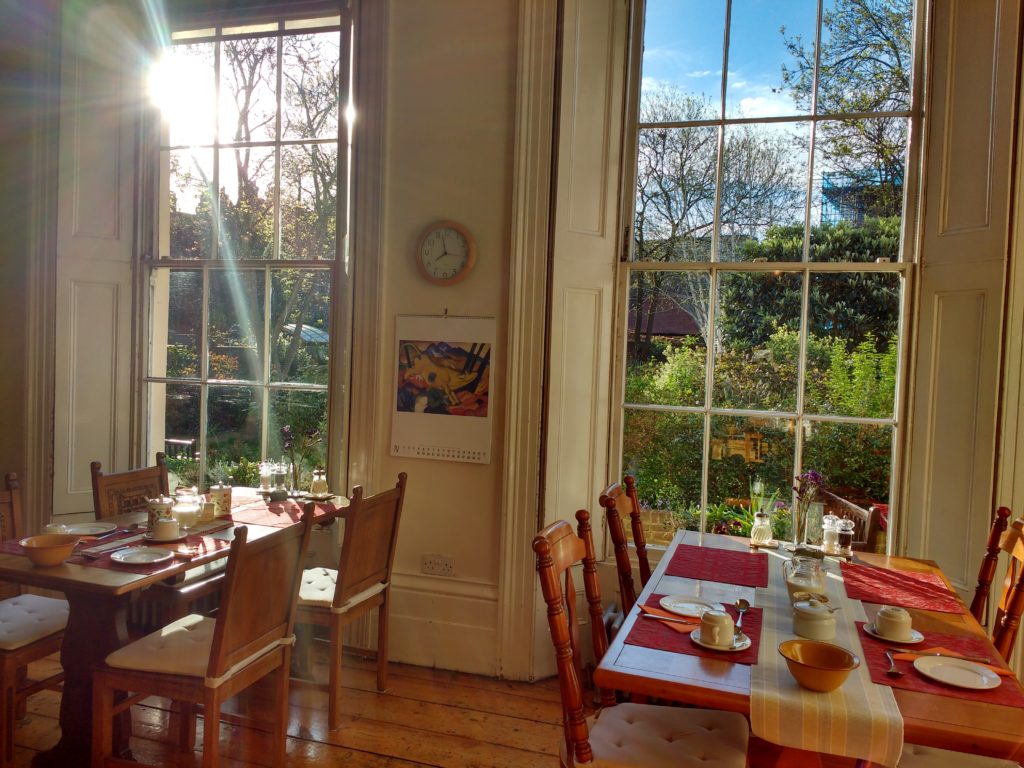 Bed and breakfast guests can enjoy their morning tea or coffee and the hearty affair from the breakfast buffet in a relaxed and warming atmosphere. In the breakfast room, there are three large antique windows looking out to the garden, bringing brightness and sunshine into the room and peace to the mind.
DISCOVER MORE

The ever changing garden throughout the seasons hides many treasures. Its special romantic character expresses itself in its imperfect glory. Flowers, roses, palm tree, silver birches and all kind of wilderness grow in harmony and bees, squirrels, birds and curious cats are frequent visitors in the garden, enjoying the peace just like our bed and breakfast guests.
The garden has been very generous to us. In autumn apples fall off the apple tree and its delicious apples are served for breakfast. Over the summer the seasonal flowers are used for decoration inside the house.
DISCOVER MORE